Detour to Dresden: A Road Trip from the Czech Republic to Germany

The best travel plans are the ones that are never made. While I was visiting Prague with my husband and my 6-month-old, little did I know that I was in for a big birthday surprise. We are flexible travelers and we follow the last-minute impulse to change plans or add a place to our itinerary.

So here I was in Prague, on my birthday, all excited to explore the beautiful city. We walked around the Old town and waited for the Astronomical Clock to chime at the stroke of the hour. When that was done we headed back to our rented car where my husband announced that we were headed to a different country.

And….we were on our way to Dresden, Germany.

Situated on the banks of the Elbe in Germany, Dresden not only boasts to be the capital city of Saxony but also possesses panoramic landscapes and architectural landmarks.

Our first stop was the Frauenkirche Church. Constructed in the 18th century, it stands tall and magnificent and is considered to be one of the standout examples of baroque architecture. Along with Frauenkirche the reconstruction of the city’s downtown – the Neumarkt – completes Dresden’s architectural revival. 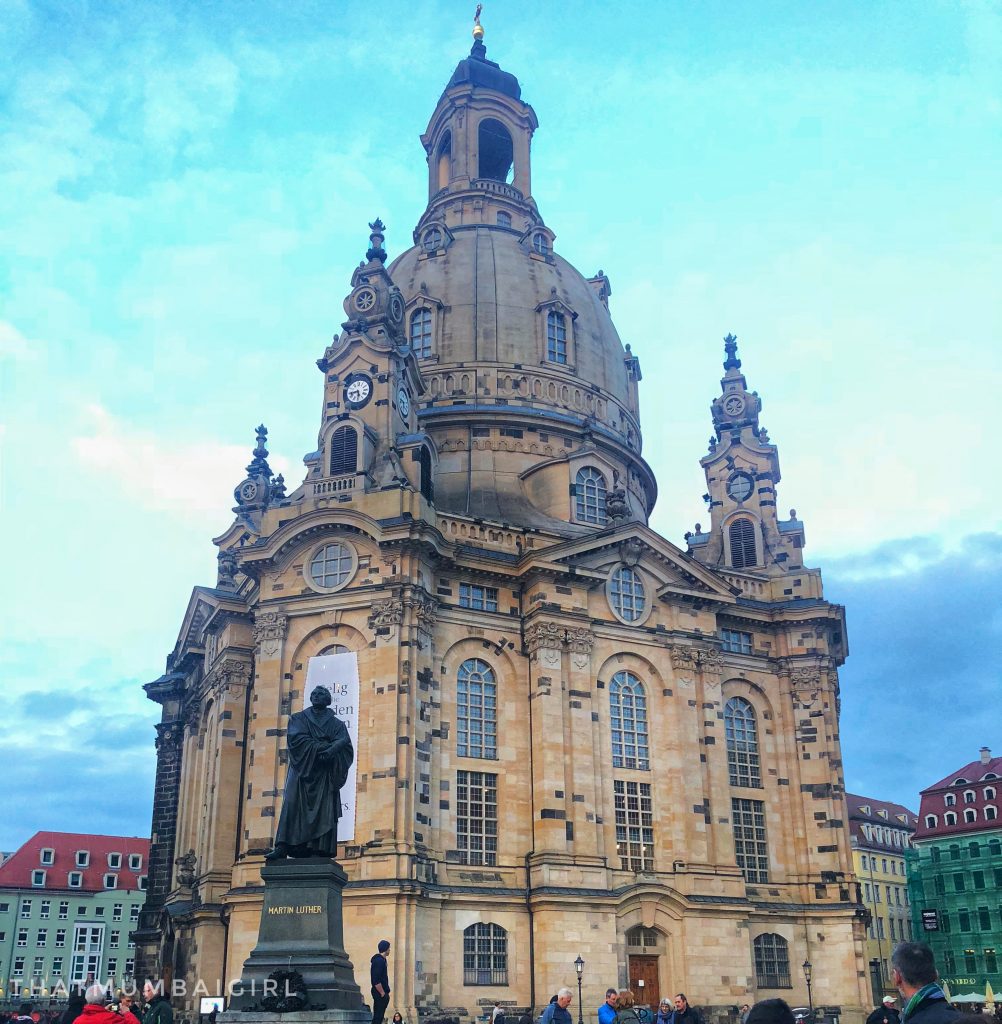 As you keep walking straight from the Frauenkirche Church, you will reach the Fürstenzug; a gargantuan mural. I was floored by the vastness of this wall. Fürstenzug, also known as the procession of Princes, is one of the largest porcelain murals in the world. It is a whopping 101-meter long mural, tiled with Meissen porcelain that leads the path to yet another marvel of the old downtown of Dresden, the Schlossplatz. It is knowns as the Dresden Royal Palace and is an integral part of the city’s panoramas. Once a hub for Saxon Royals, it was a four-wing palace back in the 15th century.

A massive fire destroyed the original structure in 1701 and 500 halls and rooms were burned down again in the allied bombings. Despite all this, the Palace has now been restored to its architectural glory that combines baroque and neo-renaissance styles. It’s a treasure trove of art with a fine collection of prints, drawings, and photographs.

Detour to Dresden: A Road Trip from the Czech Republic to Germany

Tasty Treats: 5 Foods Not To Miss In Malaysia

Insiders Istanbul: 5 Foods Not To Miss in Turkey

Transit Travelers Tale: 10-Hours To See Everything In Istanbul